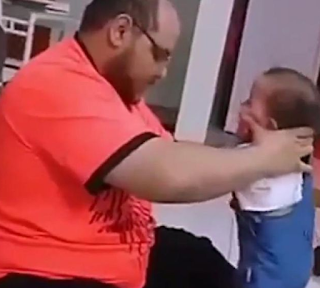 A heartbreaking video showing a man slapping a baby multiple times and lifting him into the air before tossing him to the ground, also multiple times, has caused outrage.

In the shocking video, the man is seen trying to get the baby to stand on his own, but the boy couldn't, so he slaps him across the face multiple times and doesn't stop, even as the child cries.

He then positions the baby besides a table, with the child's hands on the table for support, and tries to get the baby to stand on his own. But the baby's legs wobble and this angers the man so, he slaps the baby on the stomach twice.

A man who was captured in a viral video beating his daughter has been arrested and his identity revealed.

In a video that angered the world, the Arab father is seen slapping his little daughter across the face multiple times, slapping her belly multiple times also, and lifting her into the air then letting her fall to the ground, all in a bid to force her to walk.

The video went viral and led to calls for the man to be found and arrested, and he was soon identified.

Omar Zorba, a famous Jordanian blogger, posted information on the man saying he is Yousif Alqutai, a Palestinian who lives in Saudi Arabia.

He said: "He is known to be a weird man by his colleagues. He doesn’t speak to any of them and none of them even know his phone number. He has two girls and a boy."

As the video was trending, the Arab man released a video where he apologized and tried to justify his brutal act.

He said he wanted to teach his daughter to walk by beating her and said that the video is "old". He added that his wife who left the house two weeks ago, leaving him with their four children, was the one who published the video to punish him.

The father showed the battered girl to be older now and apologized to the people and authorities. He justified his action by saying: "I was teaching the girl to walk, look she is walking well now."

He said: "I’ve been taking care of my four children for the last two weeks. They are not abused now. They are all fine. It's an old video and I have repented to God. Back then I was going through psychological problems."

His justification angered people even more and they asked that the four children be taken from him.

The Saudi police have now given an update on the situation. They posted on their social media feed that the man has been arrested and his four children were taken away from him.

"Riyadh police arrests a Palestinian resident for torturing his three-year-old daughter and provide care for his four children in coordination with the concerned authorities," police said.

Meanwhile, there is a video making the rounds, purportedly showing the abusive father being brutally flogged. The man was stripped to his briefs, his hands were tied behind him, and he was flogged mercilessly.

See the video below.

Social media does it again.

They got that guy who abused the baby. pic.twitter.com/bbObe3hhYQ
— Isima (@IsimaOdeh) September 25, 2019